Butlins Day 1&2 - Arrival and the Shows

Upon our arrival at Butlins, an hour later then we planned due to our hectic trip here (click here to read my blog post about our trip). We were directed to our check in point and quickly found a trolley for all our luggage (and for Tilly as her legs ached!). Our check in we really easy and quick and we were soon on our way to our apartment. Although the receptionist had given me a map and explained where to go we still got lost, we tried to get into someone else's apartment and walked around in a complete circle before realising our apartment is right opposite the check in office!

Once we finally reached our apartment we were pleasantly surprised that because the book was originally for 4 people, we had been given two apartments and the joining door had been unlocked, as a result we both had our own rooms and our own bathrooms. The rooms were clean and came with a tv, kettle and sachets of tea and coffee.

Once we had had a relax, got changed and unpacked we headed out for the evening entertainment. We watched the Skyline gang and Tilly fell in love with Rainbow the dog. After the show there was a photo opportunity, they told Tilly when it was here turn she could sit next to whom ever she wanted. So Tilly being Tilly pushed her way through all the gang so she could stand on the stage withRainbow. We were near the end of the queue or a photo and the gang had been sat on the stagefor quite a while but they were just as enthusiastic towards Tilly then they had towards the firstfew children in the queue.

On the 2nd day we enjoyed a nice lay in before enjoying a day watching the shows. We watch Angelina ballerina, Bob the builder, fireman Sam, Billy and Bonnie bear story time and the puppet show. All the shows were really engaged with the children and all the characters had photo opportunities afterwards. Although Tilly doesn't really watch any of TV shows, she really enjoyed all the shows and meeting the characters. 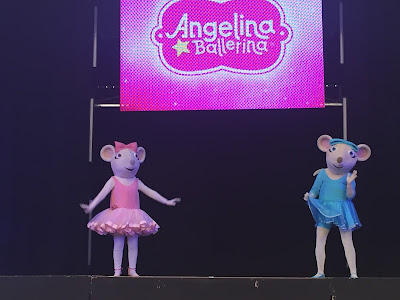 We spent the evening watching that nights show which was Buffalo Billy which we both really enjoyed. Overall we had a fantastic first few days and were looking forward to the rest of the holiday.