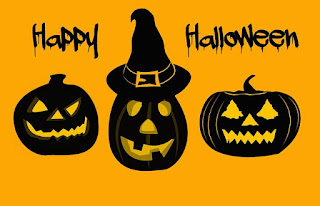 For the last few days Tilly has be begging me to help her carve her pumpkin but I have been
trying to put it off. Today I decided I couldn't put it off anymore and we went into town to buy a pumpkin carving kit from Poundland. All the way home Tilly was excited and thinking up designs for her pumpkin while I was wondering how she planned to do some of these designs with only a simple carving set and two people who have very little artistic skills! 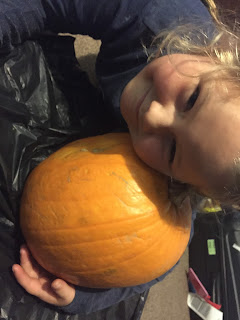 When we reached home, I covered the floor with bin bags and sorted one out for the inside of the pumpkin. I then placed Tilly and the pumpkin in the middle and hoped for the best! 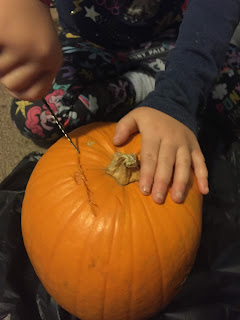 Tilly's plan was to just stab the cutter into the pumpkin and try to somehow make a scary face. However I was able to persuade her that it would be best to draw on a face face first and use it as a template. 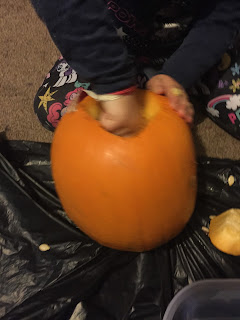 We then had the dilemma as to what face to use. Tilly decided she didn't want a happy pumpkin and said she wanted me to take a picture of her while she pulled a angry face so she could copy it! I instead suggested we look through google images to find a face Tilly liked and she decided this was a better idea. We then spent 10 minutes picking a face before Tilly found what she described as the perfect pumpkin! By this time I was regretting my decision to carve a pumpkin with a 6year old!


My drawing on the pumpkin was terrible! The teeth looked weird and the eyes were different sizes although I was amazed that I was able to make them level! 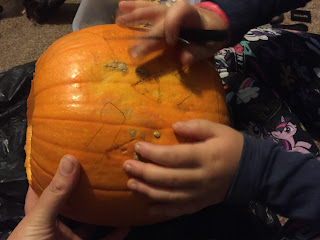 I then told Tilly to cut the top off the pumpkin and bless her she tried her best but I did have to finish it for her. After showing her how to scoop out the inside of the pumpkin, I told her to go for it. What a mistake! She really did go for it and for a minute I thought Halloween had come early and someone had let a monster in! There were strange noises coming from Tilly and pumpkin seeds flying everywhere. I was glad I had covered everything in bin bags!

Once she had scraped out the middle, she went about making the face. She did a surprisingly good job and the pumpkin looks really awesome (after she had finished I did go over it and even out the eyes). 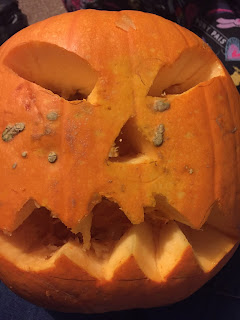 We both then cleaned up the bin bags as it looked like we had killed something! We put all the rubbish in the bin and mum doesn't need to know we made such a mess!
at October 31, 2016