I love cooking however with my job and its awkward hours, I don't often have any spare time to cook. A few months ago, I was offered a place on a cookery course at the Chequers cookery school. I really enjoyed it and my skills and confidence in the kitchen grew massive.


Therefore I jumped at the opportunity to do a second course aimed at parents and children. The course aimed to get children and parents or guardians having fun and cooking tasty and healthy food in an attempt to prevent fussy eaters. 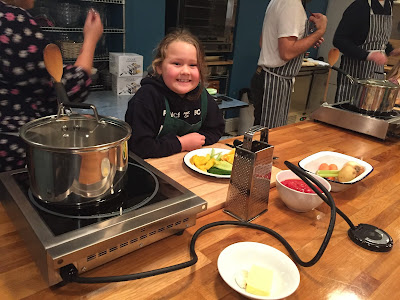 We turned up to find that all the ingredients and bits we needed had been measured out and put ready for us. There was also a plate with a mixture of fruit and vegetables for us to nibble on while we where cooking.

Our teacher was called Pieter and he was brilliant with the children. He asked if they could name each of the ingredients and he did things in steps so the children could keep up.

Pieter all encouraged the children to do a lot themselves. Although this did cause a few issues! The first of which was letting Tilly cut up the vegetables with a sharp knife. She listened carefully to the instructions and used the correct cutting technique however her hands where so small, she couldn't quite do it. I offered to hold the vegetables while she cut them. I honestly thought I would go home with less fingers then I arrived with! 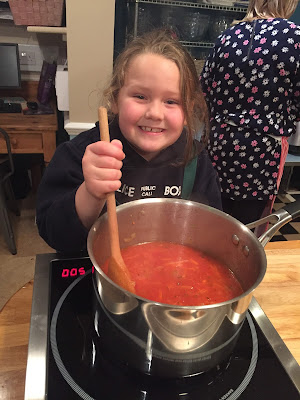 After we finished our chopping, I allowed Tilly to do some stirring of the vegetables. She was very excited and stirred the vegetables with a little too much enthusiasm and there were pieces of onion and potato flying everywhere.
After we had left for soup to boil, we started work on our garlic bread. We were given a ciabatta and told we where going to make our own garlic butter. Tilly didn't recognised the garlic and asked what it was, I told her it was garlic but she misheard and thought I said Dalek! That made us both giggle and from then on we called it Dalek bread! 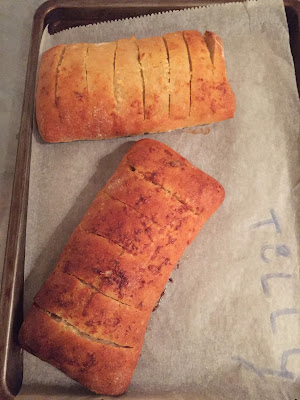 We them sat and ate our soup and Dalek bread, it was really tasty and Tilly ate some of the vegetables in the soup that I wasn't sure she would eat.

Overall me and Tilly really enjoyed our cooking class and we both learned new skills, had fun and spent some lovely quality time together. We are both looking forward to our next class. 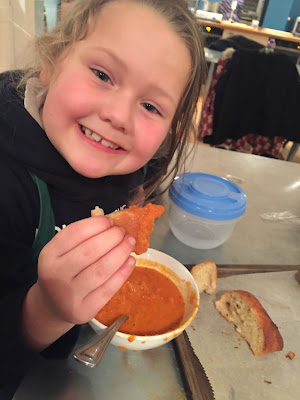