This week was Tilly's school sports day and as mum was working I went along to cheer Tilly on. Because Tilly is in key stage 1, their sports day is focused on having fun rather then winning. Although the children are sorted into houses and wear sports kits in their house colours, they don't race for medals or house points until key stage 2. I liked this as the children are only young and its nice to just enjoy the day without worrying whether the children will be upset if they don't win.

Every class was split into 2 groups of around 12 children and each group would spend about 5 mins on each of the 12 section. Parents were invited to watch their children and move around the field with their group.

There were a range of event including javelin throwing, running racing, beanbag throwing, an obstacle race and an unusual race where the children had a shopping basket and had to run around collecting toy food! It did look very fun.

Tilly's first race was the sack race. She was very excited as she lined up for her turn. When it can to her turn, she did really well. She was enthusiastic in her jumping but when she got to the cone to turn she colliding with another child and fell over. Although she didn't hurt herself, she burst into tears. Her teacher rushed over to her and helped her back to the line. I didn't want to make a fuss of her as a thought that would make her more upset and she soon went back to smiling with her friends. 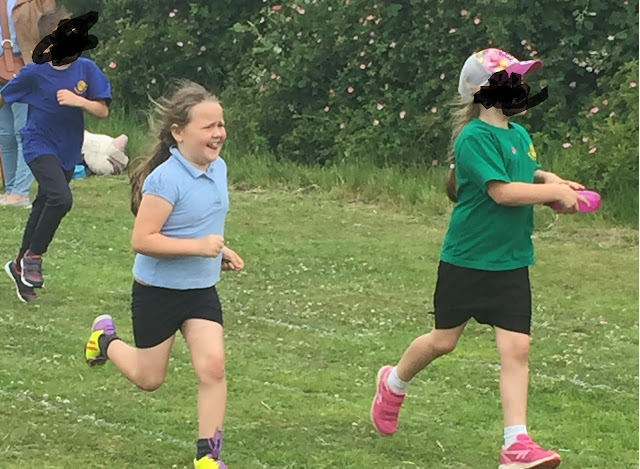 A few minutes later she came to the front of the queue again and she didn't hesitate to try again. I was so proud that she didn't give up and so grateful to some of the other parents who had seen Tilly upset and had cheered her on more enthusiasticly the second time around.

Tilly did really well in most of her races. She threw all her bean bags into the hula hoop, won her obstacle race and managed to do the whole egg and spoon race without dropping the egg. However we realised that the space hopper race was maybe not her race as she was doing ok, but gave up after doing about ¾ of the race and just walked the rest of the race still holding onto the space hopper making it waddle behind her. I managed to get this on film and no matter how many times me and Tilly watch it, we can't help but giggle. 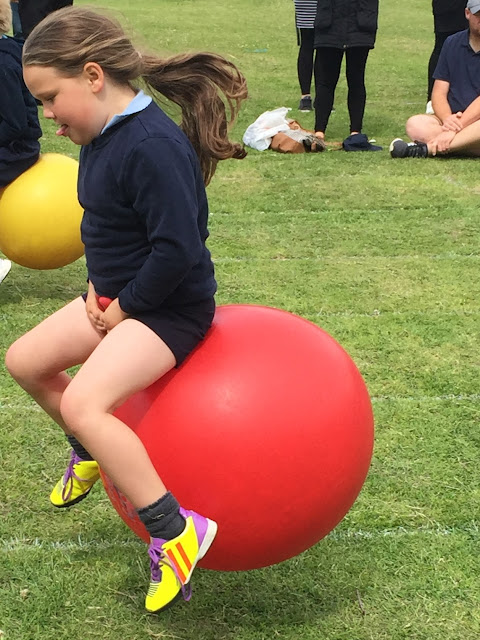 After the sports had finished we sat and had a picnic in the field with Tilly's friends. Overall it was a really good day and everyone had a lot of fun and I am really glad I was able to make it.

I'm not really a girly girl. I really don't like wearing dresses but I have been asked to be a bridesmaid at my brothers wedding and so will be required to wear a dress. My brothers fiancée told me what sort of thing she wanted but said I could chose it myself so I was comfortable. This left me in a bit of a dilemma as I wanted to respect my brothers wishes and wear a dress but I was struggling to find a dress I liked.

Last year I started wearing glasses but I am always loosing them or forgetting them. I frequently get half way to work before realising my glasses are not on my face!

Tilly made her Brownie Promise

This week Tilly made her brownie promise something that we make a big deal about in my pack. We make sure the girls understand what the promise means and we make the evening about them.

Sofia the First Give away

As you may know, a few weeks ago I attended the BlogOn conference in Manchester. We were all given awesome goody bags full of some really useful bits and bobs.
Read more »
at June 02, 2017 21 comments: