This week I mum planned on taking Tilly and a few of her friends to London for an exciting day out. We realised that they would have to get a train quite early in the morning and as many of Tilly's friends have younger siblings it was easier for all the girls to sleep over the night before. It was then when mum conveniently remembered that she had been invited for a night out to celebrate her friends birthday. So I was left alone as the responsible adult for Tilly's first group sleepover. 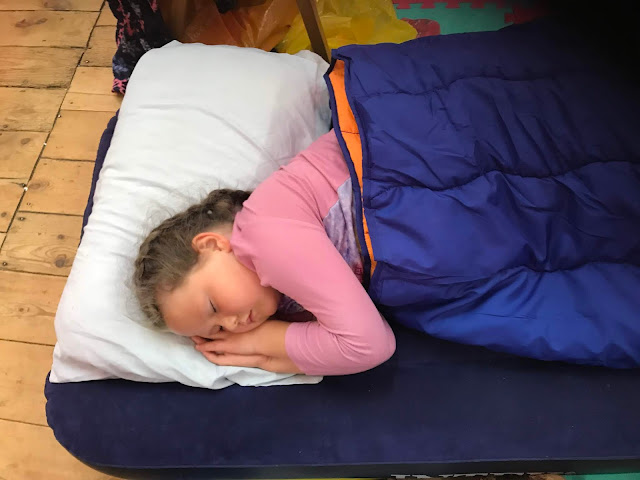 Earlier that day, me mum and Tilly had spend time tiding up and making sure everything was ship shape. Not that an 8 year old cares about how clean the house is! Although it was a good way of getting Tilly to tidy her room as she knew it needed to be tidy to allow her friends to sleep over.

What we didn't originally tell Tilly however was that we planned to put all the kids in the living room as there is no way they would have all fitted into her bedroom.

After the house was tidy, I was running around the house trying to find as many duvets as possible. I knew we did have some spare but the question was where? After locating enough sleeping bags, blankets and duvets I spent the next several hours blowing up air beds because guess who couldn't find their electric air pump! By the end I was exhausted and we hadn't even begun!


When the girls arrived and mum left they promptly got into their pjs. I had set up a snack table with juice, water, slices of cake and a few sweets for them to enjoy ( I was surprised some of the snacks where still their the next day). At first the girls seemed quiet and I thought this is easy. They were playing a game and there seemed to be no arguing so I left them too it. However as the evening went on, they got noisier and noisier, Soon I couldn't hear my TV program over them so asked them to quieten down. They did... for a few minuets!

By 11:30 even I was tired and told the girls to go to sleep. They all chose their beds and the lights went out. As I was lying in bed I could still hear giggling and talking coming from the living room. They finally settled down about midnight but when I checked on them they had all migrated onto one of the double air beds and were all in tangled up! It was cute but I moved the girls so they were at least comfortable and covered over.

Overall I think Tilly's first group sleepover went well although there was very little actual sleeping. No one was hurt and they all left happily for London the next day. I had to work that day so couldn't go to London but spent some more time recovering in bed.