I love to bake. I love baking goodies such as cakes and biscuits. I am not very good at it, my bakes are normally simpler recipes and don’t always look as pretty as I hoped but they are always edible and normally taste good.

This week I decided to make some cupcakes. I liked the idea of attempting a like with layers of different colours. Matilda was excited about helping me and I thought why not?

She was very enthusiastic and every time I grabbed an ingredient she got excited and declared she would pour it in. I had to keep reminding her that we have to measure things! My baking skills are not quite as good enough to guess at quantities.

Me and Matilda had fun together and she particularly loved the mixing. We separated the mixture into 4 so we could have 4 different colours. We mixed in food colouring and We pleased with the variety of colours we had.

The baking was going so well. We were able to get the layers of the different colours without them mixing and I was pleased with the results.

That was until we added the last layer, which was a yellowy colour. I think the weight of the mixture was too heavy for the cupcake cases and what come out of the oven could be described as an explosion in a sponge factory!

Some of the cupcakes where fine but a couple had spilled out of the cases and filled the tin. 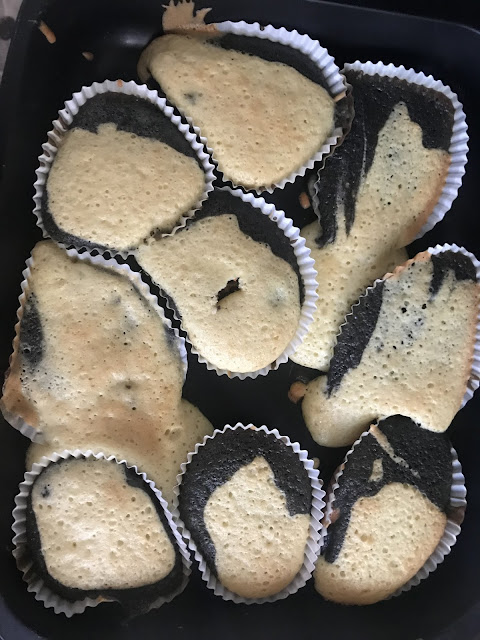 We were able to salvage some of them and Matilda had no problem with eating what we were unable to decorate.

We had some spare mix which I put in. I used less mix per case and double cased them. Although these ones were not layered, it meant we had some cupcakes which looked like cupcakes (although we only had black sponge mix to use)!

After the cakes were cooked and cooled I let Matilda decorate them. We made some buttercream icing. After unsuccessful attempts at using a piping bag I told Matilda to just plonk it on the cakes.

Although some of cakes looked a mess they tasted delicious and the cake from the first attempt that we were able to salvage, you could clearly see the coloured layers. I was proud of them.